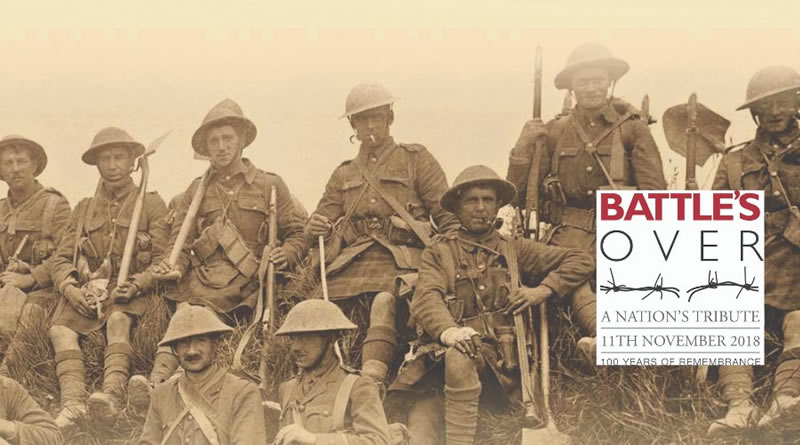 To conclude a day of commemorations we would like to invite you to join us to remember the 14,000 men and women who lost their lives in the First World War. Our Battle’s Over – A Nation’s Tribute will take place on Sunday 11 November at Victoria Embankment from 6.30pm. John Holmes from BBC Radio Nottingham will host this tribute of music and poetry and the beacon will be lit at 7.00pm followed by bells ringing out just as they did 100 years ago.

Meadow Lane and The City Ground

Marking the centenary of the Armistice, troops from the British Army Football Association will take on the German Bundeswehr to commemorate soldiers from both sides who made the ultimate sacrifice during the First World War.

The women’s game will be staged at Meadow Lane (kick-off 12pm) and the men meet at the City Ground (kick-off 7pm). A number of football legends will be in attendance at both matches.

Tickets provide entry into a family friendly fan zone which will open at the grounds two hours before kick-off, featuring displays of equipment and military bands to create a very special commemorative atmosphere.

Full details and tickets can be found at the Games of Remembrance website.

The Embankment will be the City’s focal point for commemorations on Armistice Day. The traditional two minute silence and wreath laying will once again take place at 11am, with a larger and enhanced viewing area created to ensure that more people can be accommodated at the ceremony.

Further Armistice Day parades and services are held across the city, including the South Notts Hussars who march from St Mary’s Church to the Council House.

Between 1914 and 1918, over 14,000 men and women from Nottingham and Nottinghamshire lost their lives in the First World War, and families across the county still remember those lost. The Nottinghamshire WWI Roll of Honour War Memorial will be the first monument of its kind to incorporate a full list of casualties for the whole county, rather than for individual towns, villages and workplaces. Situated in the Memorial Gardens on Nottingham Victoria Embankment, close to the City of Nottingham War Memorial, the WWI Roll of Honour will provide a befitting and lasting commemoration that will be visited by generations to come.

The memorial is being commissioned by Nottingham City Council and Nottinghamshire County Council, working in partnership with the seven district and borough councils.  A large portion of the funding needed to create this lasting legacy is already secured but we now need to raise the remaining £70,000, which we hope we can do through contributions from local businesses, as well as the public.  We are well on our way to meeting the target with just over £45,000 already pledged but there is still a way to go and we would massively appreciate your help. If you would like to be involved with this amazing project to honour our fallen World War I heroes and ensure that future generations remember the sacrifice made by so many you can donate here http://nosf.org.uk/roll-of-honour.html