Inspired by the success of some of this years young creatives with disabilities, Cressida Laywood took part in a stationary charity bike ride on 4 September. 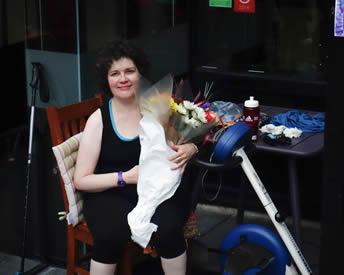 23 years ago, Cressida Laywood suffered a brain haemorrhage that left her with a severe speech and language disability (Aphasia), as well as leaving her paralysed on one side.

In May of 2015, Cressida attended the Young Creative Awards Ceremony at Nottingham Playhouse. She was incredibly inspired by the success of some of the young creatives who won awards this year who have disabilities.

To celebrate the 23rd anniversary of her accident, Cressida took part in a stationary charity bike ride at Nottingham Playhouse on the 4th September.

We would like to thank everyone who supported Cressida and helped her to reach and surpass her target of £1800 to go on to raise a total of £1909.62!