Five people who have made outstanding contributions to Nottingham life were recognised at a special ceremony on 1 October.

The Nottingham Awards, which this year are sponsored by leading law firm Geldards, took place at the annual Goose Fair Dinner which takes place at the city’s Council House.

The Award, now in its fourth year acknowledges and celebrates the contributions individuals have made in three main areas: the Public Sector, the Voluntary and Community sector and the Private and Business sector.

This year there will be two special awards. The sponsors Award nominated by Geldards and presented by Sir John Peace; and an award to recognise a life of service to Nottingham.

The Public Sector award was presented to Ann Priest.

Ann retired from Nottingham Trent University as the Pro-Vice Chancellor for Student Affairs and head of the College of Art, Design and Built Environment in July 2015.

She is receiving the award as she has made a major impact in Nottingham in Higher Education and in community arts. Ann has also been a significant influence across the UK and beyond. Generations of students have benefited from her unique brand of creativity, drive, commitment and her sense of humour.

Outside Nottingham, she has been a member of a working group for Arts Council England.

Ann has always been a passionate supporter of students, she has worked with the Students Union as well as being an advocate for NTU’s growing involvement in Nottingham’s communities. It is no small part a credit to Ann’s role that NTU now has a significant proportion of its students from the Greater Nottingham area.

She has been a regular advocate of the Nottingham Young Creative Awards since its beginning in 2009. 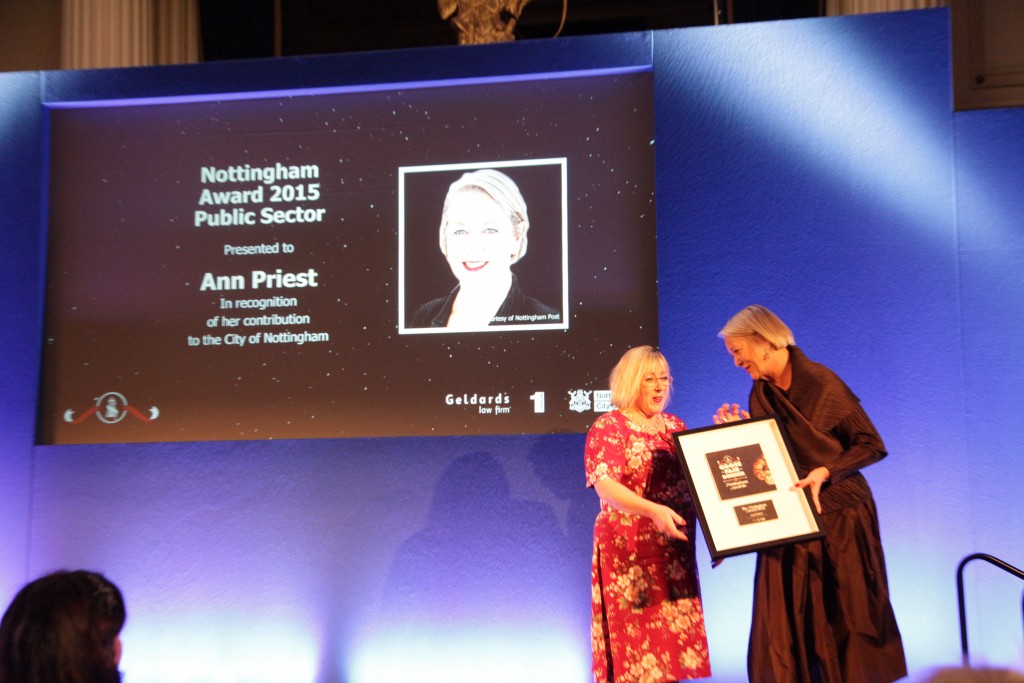 Ian Smith has been the Director of the Television Workshop since 1987 directing over 200 shows with the Workshop until his retirement this summer.

He has also written a number of performance pieces for the group – one of which was performed at the children’s BAFTAs. He has recently completed a successful comedy development project with Hat Trick Productions and also has run casting/development workshops with Lucky Giant, the comedy arm of NBC Universal.

Ian is a person who never tires of working behind the scenes to get the best out of young people. When Central TV ended its formal contract with the workshop some years ago, and moved to Birmingham, Ian just got on with running the TV Workshop as an agency regardless. The resulting success speaks for itself. 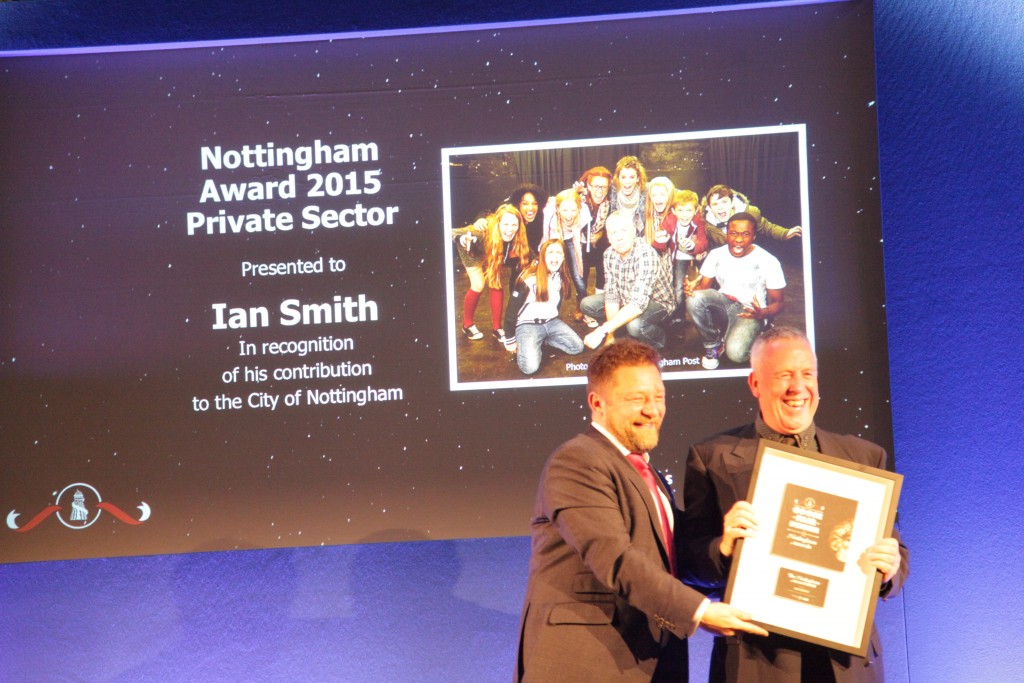 The winner of the Voluntary / Community Sector award was Inder Lal Batra.

Mr Batra has been a leading member of the Indian Community over the past 50 years in Nottingham. He has sought to promote understanding and co-operation between different communities and to help inform people of the different cultures in Nottingham.

He established the Hindu temple and the Punjabi Centre, he committed his time to of many groups and organisations that. Throughout the 1970s/80s and 90s he served as Chair of the African Caribbean and Asian Forum (ACAF), Nottingham & District Race Equality Council and the Indian Community Centre.

He helped to promote cultural life of different groups through music and literature events, workshops and activities.

The Geldards award was presented to Richard Tresidder for his long service in the City, his commitment to Nottingham and for his insightful and informed journalism in the Nottingham Post.

Richard was a director of Profile Nottingham, the destination management company that grew into Experience Nottinghamshire. He is now a director of Bromley House, the subscription library in the Old Market Square and was business editor of the Nottingham Evening Post for many years. Richard has been an advocate for Nottingham for his whole life and a long term resident and advocate of the Lace Market.

He still contributes to the Nottingham Post and is well known for his networking and as a local raconteur. 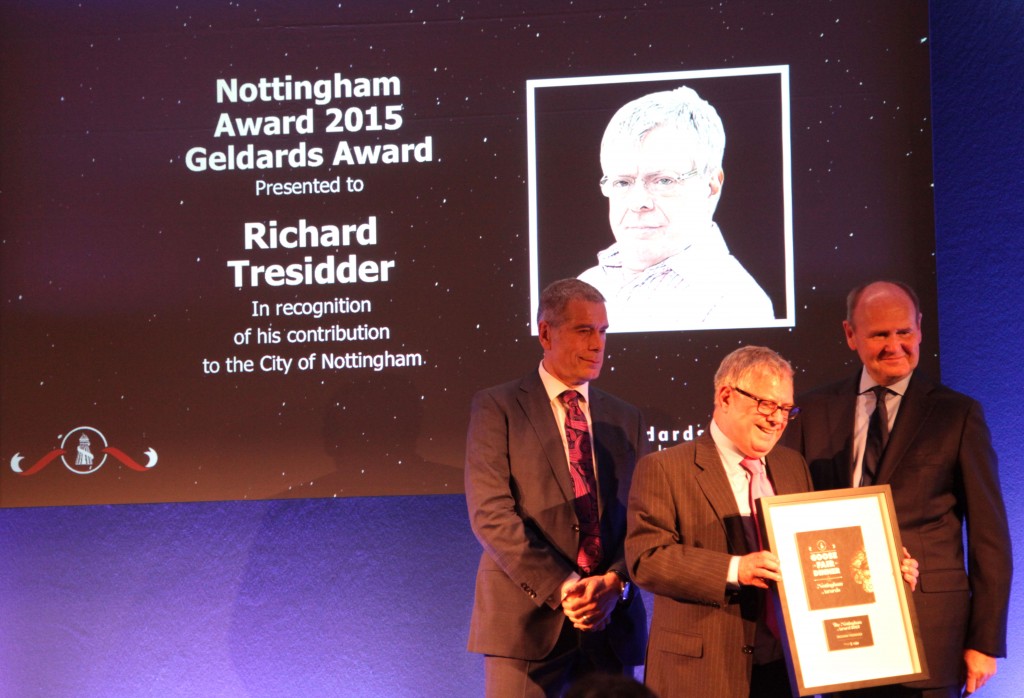 A special award goes to Betty Higgins for her lifelong service to Nottingham.

Betty’s long career in Nottingham went from being a school teacher to Leader of Nottingham City council for 10 years. Her achievements included the bus company, which laid the foundation for the trams and buses which we now have.

She presided over a growth in council housing and then maintained the council’s housing stock to ensure that good quality housing would be available for local people and left the legacy for Nottingham City Homes.

Betty tirelessly campaigned for women’s voices to be heard and to get women represented in public civic and community life. 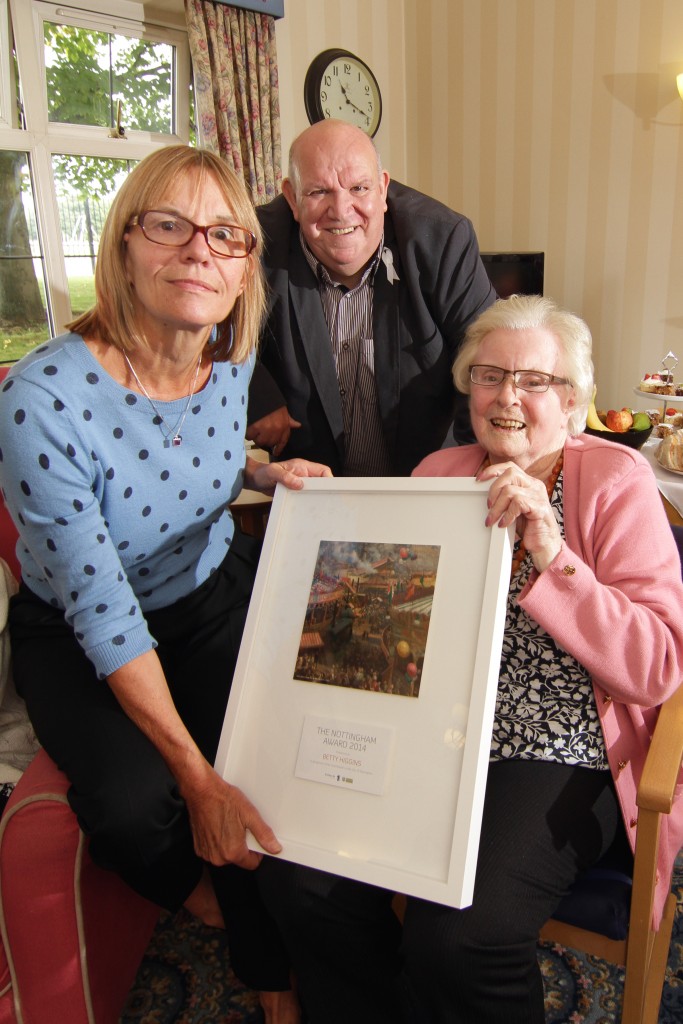 Jane Todd MBE Chair of One Nottingham, said: “These awards are a way of saying a very public thank you to very notable people within the city of Nottingham who have raised the bar by being successful in their own fields.

“More than that, they have contributed across the city in a way which makes Nottingham a great place to be and they are an inspiration to the generations of people who follow”.

Paul Southby, a partner at Geldards, explained: “Nottingham is a fantastic city in which to live, work and play and that has a great deal to do with the individuals and partnerships that these awards have helped celebrate.

“Geldards has always been actively committed to supporting its local communities and the firm is proud to support One Nottingham and the Awards as they continue to promote the city’s community spirit and showcase Nottingham as a leading area of creativity in the UK.”