Nominations are now open for the Nottingham Awards 2016. 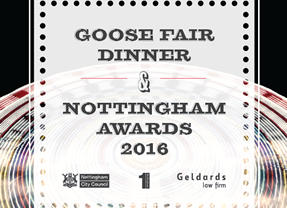 Nominations are invited for people who have made a significant and lasting impact for Nottingham, in Nottingham. This impact can have been locally, regionally and potentially wider. People who are nominated should have made their contribution whilst living, working in or have made Nottingham the centre of the work that the nomination/award recognises.

For the second year Geldards Law Firm will present a special award.

People who are eligible to receive a Nottingham Award should not have received a major award for their contribution to the city (such as MBE or similar UK award).

You are invited to submit nominations for people to receive the award. The closing date for nominations to be received is 1st August 2016.

The awards will be presented at an annual event at the Nottingham Council House which marks the Goose Fair each year. The people who have been shortlisted will take part in a memorable evening. You can view the photos from the previous years’ awards here: www.onenottingham.org.uk

Awards are made in three categories, their contribution was made from:

· The Voluntary and Community Sector

· Has the nominated person made a significant and lasting impact for Nottingham, locally, regionally and potentially wider?

· Has the nominated person received other awards for their contribution to the city (such as MBE or similar UK award)?

· Has the nominated person made their contribution whilst having lived in, worked in or made Nottingham the centre of the work that the nomination/award recognises?

You can nominate a person by completing the enclosed form and sending it to the address at the bottom of the form. Please complete the nomination form as completely and accurately as possible. It is important that you can provide as much information as possible about the nominee and try to explain what their actual contribution has been, as opposed to just listing jobs or posts held.

You may use additional sheets of paper to support the nomination.

The use of this form is not compulsory. You may also write or email togeneral@Onenottingham.org.uk, though you are encouraged to complete the information requested on our form.

Previous winners of the Nottingham Award are:

· Derek Brewer, The former Chief Executive of Nottinghamshire County Cricket Club for his work at Trent Bridge and in Nottingham transport

· Helen Voce, for her work in the community and voluntary sector

· Peter Plummer for his achievement in education and leading the transformation of Elliott Durham School.

· Glenn Crocker, Chief Executive of Biocity, for growing Biocity to be the largest bioscience incubator in the UK

· Courtney and Trevor Rose, for providing innovative opportunities for studio time, musician and diversionary activities with some of Nottingham’s most challenging young people.

· Jane Geraghty for her leadership in the Public and Voluntary sector, particularly for transforming the Nottinghamshire Probation Service.

· Craig Chettle – the founder and Managing Director of Confetti for his ground breaking work in Confetti and in the Nottingham Creative business sector and Further Education.

· Tom Huggan for a lifetime contribution to the City of Nottingham. He served the city in many guises including through the Nottingham Civic Society, Green’s Windmill, the Nottingham Playhouse and the Castle amongst others. He practiced law in Nottingham and he is also the serving Town Crier.

· Ann Priest – who has made a major impact in Nottingham in Higher Education and in community arts. And had significant influence across the UK and internationally.

· Ian Smith – the formers Director of the Television Workshop directed over 200 shows with the Workshop and discovered a wealth of acting talent from Nottingham.

· Inder Lal Batra, – was been a leading member of the Indian Community over the past 50 years in Nottingham. He sought to promote understanding and co-operation between different communities and to help inform people of the different cultures in Nottingham.