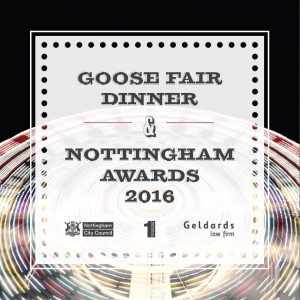 The Nottingham Awards 2016 have honoured some of the city’s biggest contributors; including the city’s only Michelin starred chef, a top designer and two people who have tirelessly worked to help the homeless and cancer sufferers in BME communities.

The awards, which are in their fifth year, were held at the Council house following the historic 722nd Goose Fair opening and dinner on Thursday 6 October 2016.

The awards celebrate those who have made Nottingham the great city that it is.

The panel consists of City Councillors and One Nottingham Board members. The panel chair this year was the Chair of One Nottingham, Jane Todd, who received one of the first awards (before going on to receive an OBE). Speaking at the event, Jane said: “It’s been an honour to help decide the winners of this year’s Nottingham Awards. They’ve all made an amazing contribution to the city and this is our way of saying thank you.”

The award categories and award winners for 2016 are:

Ruth has been recognised for her work as CEO of Emmanuel House, a charity for those suffering from homelessness in the centre of Nottingham. She helped save the centre from closure, she led and inspired staff as the centre thrived. The charity is now thriving and helps people across the city.

Rose, who is an expert on BME and cancer, has been awarded for her ground-breaking work on helping to address cancer inequalities within black and minority ethnic (BME) and low income communities and her long history of cancer charity work. She is the founder of many groups and networks, most recently a community prostate cancer clinic here in Nottingham.

Nottingham designer Daniel, who counts the Duke of Cambridge, Brad Pitt, Elton John and Victoria Beckham amongst his customers, has been rewarded for his work for the city and fashion industry, including supporting local arts and charities.

Sat Bains became the first restaurant owner in Nottingham to be awarded a Michelin star in 2003. The rating was increased to two stars in 2011 and the restaurant has been awarded five rosettes by the AA. After winning the 2007 series of Great British Menu, he has made several TV appearances. He has some titles to his name, including Chef’s Chef of the Year and Good Food Guide’s Chef of the Year.

The last award is chosen by the sponsors of the Nottingham Awards, Geldards. Paul Southby, a partner at the company, explained “Geldards has always been actively committed to supporting its local communities and the firm is proud to support One Nottingham and the Nottingham Awards as they continue to promote the city’s community spirit, to showcase Nottingham as a leading area of creativity in the UK and to celebrate the city as a great place to live, work and play.”

Councillor David Mellen, Portfolio Holder for One Nottingham, said: “The winners of this years’ awards have all made a significant and lasting impact for Nottingham, locally, regionally and potentially wider. Nottingham is a city with great success sitting alongside real need. A city where people succeed in their vocation and support others who have not had the same opportunities in life, or have been overcome by circumstances which are beyond their control. These awards reflect this range of people.”

Guests were entertained by cellist and winner of the 2016 BBC Young Musician of the Year, Sheku Kanneh-Mason accompanied by his sister, Jeneba, on the piano. The event also helped to raise funds for the book gifting charity, Dolly Parton’s Imagination Library.

Photos from the night can be viewed here.