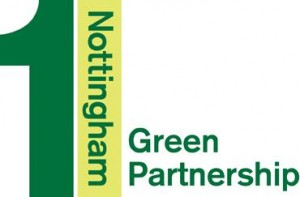 Members of Nottingham’s Green Partnership celebrated reaching their twenty-five year anniversary this month. Over twenty organisations in Nottingham from business, the public sector and the third sector are part of the partnership which aims to encourage cross city collaboration to advance Nottingham’s green future. The partnership brings these organisations together enabling them to collectively work towards tackling the city’s environmental challenges and to minimise its environmental impact.

The partnership celebrated its quarter century anniversary with a special event on Thursday at the Green’s Windmill in Sneinton. The event looked back at some of the partnership’s achievements including:

Helping to formulate the sustainability targets for Nottingham’s Sustainable Community Strategy launched in 2009 and subsequently being responsible for helping the city to meet them.

Championing the green measures such as solar panels and wall insulation adopted for social housing and neighbouring private households in areas such as Aspley, Bulwell and Clifton.

Supporting the provision of green, local and healthy food in the city’s schools and hospitals

The group also looked to the future and shared their progress towards developing a Sustainable Development Action Plan for the city. The action plan will cover five themes – water, biodiversity, energy, transport and waste and will set out a range of ideas to encourage and inspire sustainable practices for citizens, businesses and the non-profit sector. The development of the action plan has been supported by over 350 local people who responded to the partnerships survey to find out what is important to people who live and work in the city.

Richard Barlow Chair of the City’s Green Partnership said “By working together we can achieve more. Nottingham already has a great reputation for being a ‘green city’ which was reinforced last year when Nottingham beat its 2020 climate change target to reduce its carbon emissions by 26%, the actual reduction achieved was a fantastic 33%. Our efforts are paying off and we hope that our Sustainable Development Action Plan will inspire us all to support Nottingham to meet its environmental targets for 2030 and beyond.”

Councillor Alan Clark, Portfolio Holder for Energy and Sustainability, said: “There has been a real move towards sustainability in the city with a wide range of organisations in the public, private and voluntary sectors carrying out vital work to reduce our environmental impact. It’s fantastic that this group has reached its 25 year anniversary it highlights how committed Nottingham organisations are to doing their bit to safeguard our environmental future.”

Nottingham Green Partnership is made up of a wide range of organisations in the public, private and voluntary sectors that are working together to reduce the city’s environmental impact.  www.onenottingham.org.uk